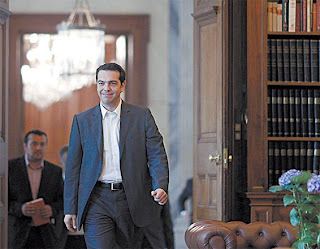 
There has been an astonishing quantity of nonsense written in the past couple of weeks about the prospect of “Grexit”, or Greece’s exit from the euro. That could be expected from people outside the eurozone, unfamiliar with the theological doctrines of the single currency, but I have been surprised by the depth of ignorance betrayed by soi-disant members of the European elite.

To summarise: Grexit is not imminent. The rise of the “anti-memorandum” Greek left-wing coalition works in a number of ways to the benefit of the troika (the International Monetary Fund, European Central Bank and European Financial Stability Facility). The newly issued Greek PSI (private sector involvement) bonds are probably cheap at today’s prices.

Last Tuesday, as I had suggested it would, the Greek government paid €435m to the holders of a maturing floating rate, English law, bond issue. The bondholders, among whom were heirs of the American Dart plastic coffee cup fortune, had chosen to be “holdouts”, refusing to tender into Greece’s exchange offer. I hear much of the speculator-holdout position was bought at between 60 and 70 cents on the euro. So they did well, though at that fairly high entry level, the position required nerves of iron. But then the Darts have good lawyers.

Some of those who negotiated for the original bondholder group were apoplectic about the Greek decision to pay, or at least acted as if they were on the conference calls. At about the same time, also coincident with the failure of the Greek parties to form a coalition government, the price of the PSI bonds fell to a low of 13 cents on the euro. I understand that among those institutions selling their entire positions into those pathetic bids were two members of the bondholders’ steering committee.
There have not been un-defaulted sovereign bonds going this cheap since the Russian default in 1998. The PSI bonds pay a 2 per cent coupon, increasing to 3 per cent after 2016, 3.65 per cent in 2021, and 4.3 per cent after that. There is no principal due until 2023, which means the burden on Greece is pretty minimal for more than 10 years. At today’s prices you would get back all your money in seven years from interest payments alone.
Of course the Greeks notionally still have the full burden of official sector debt, but that will be cut deeply as well, probably sometime next year.

The reason for the panic among selling bondholders and euro-punditry was the ascent of Alex Tsipras and the Syriza coalition of the left. Syriza rejects the conditionality, or “memorandum”, of the bailout deal. What the sellers and opinion leaders miss is that the memorandum was a dead letter anyway. There never was any possibility that any Greek government could comply with its terms. If, after the June elections, Syriza and the other anti-memorandum parties make it impossible for any governing coalition to even pretend to comply with the troika’s terms, then the troika can cut off direct payments to the Greek government without taking the blame for initiating the divorce, or, rather, temporary separation.

Even if the pro-memorandum parties put together a coalition government, they would face a determined, motivated opposition and an obdurate civil service blocking its moves. The “internationals” loathe the two mainstream parties, and their dead weight of “clientism” and corruption, even more than they do the left.

Remember that the troika could make payments for the PSI bonds through an escrow account that is not under the control of the Greeks. So when the memorandum terms (civil service layoffs, pay cuts, etc.) are rejected, probably in the second half of July, the troika could cut payments to the Greek government, yet still make the PSI bond interest payments that start in September.

Then the Greek government, now even shorter of cash, will have to impose deeper, swifter cuts than the memorandum’s. Greece will have to rapidly balance its current account and primary government budget, with the populace and Syriza hurling blame and those imaginative Greek curses at the troika.

This does not require departure from the euro, which would have huge logistic costs and delays. The Greek government can make payments in its internal debts, including civil service pay, pensions, suppliers, and so on, partly with the euros it collects in taxes, and partly with IOUs. Those IOUs would immediately trade at a discount.

After months, or even a year, of self-imposed austerity and morally satisfying defiance of multilateral imperialism, the Greek government strikes a new deal. The IOUs are formally devalued in euros, or, alternatively, at that time, turned into drachma. The official creditors recognise their losses. Greece gets some transfers/loans/ growth aid.

This still requires keeping the insolvent banking system liquid and capable of doing the day-to-day business of the payments system. That can be handled with a pre-election recapitalisation, along with limits on withdrawals and intra-euro area and international transfers, justified under Article 65 of the Treaty on European Union. (Loan books and assets would be valued forgivingly.)

This arguably allows for those restrictions “in the field of taxation and the prudential supervision of financial institutions ...”. You want “transferable” euros? Let’s see your tax returns or audited invoices for necessary imports. Maybe that would be an abuse of Article 65; the courts would tell us in a few years.

But Greece can continue to use its capital-controlled euros in the meantime. PSI bonds gradually trade up. Grexit cannot be done by a temporary caretaker government. Chill.